This is an example of an IELTS bar and line graph together. It is not uncommon to get two graphs to describe at the same time in the IELTS test.

It can look a bit scary at first. However, when you look more closely, you’ll see it is probably no more difficult than having one graph.

Take a look at the question and the graph:

The line graph shows visits to and from the UK from 1979 to 1999, and the bar graph shows the most popular countries visited by UK residents in 1999. 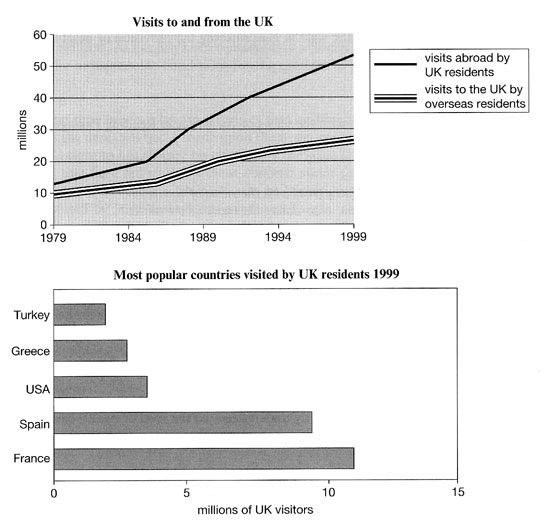 These are the steps you need to take to describe a bar and line graph together (or any two graphs) that may differ slightly from when you describe one graph.

When you state what the graph shows, mention both of them. Here is a sample first sentence of the introduction:

The line graph illustrates the number of visitors in millions from the UK who went abroad and those that came to the UK between 1979 and 1999, while the bar chart shows which countries were the most popular for UK residents to visit in 1999.

Remember to write this in your own words and not to copy from the question.

Next you need to mention the key points from the graph. When you do this, mention the most interesting things from each:

Overall, it can be seen that visits to and from the UK increased, and that France was the most popular country to go to.

If there are two graphs and a lot of information, you will have to be careful not to describe everything as you may then have too much information.

Also, the examiner is looking to see that you can select the important things and not describe every single detail.

So the key skill when you have two graphs is being able to pick out the important information or summarize things in a concise way, otherwise you will end up writing too much and probably run out of time.

Here is an example description for the bar and line graph:

To begin, the number of visits abroad by UK residents was higher than for those that came to the UK, and this remained so throughout the period. The figures started at a similar amount, around 10 million, but visits abroad increased significantly to over 50 million, whereas the number of overseas residents rose steadily to reach just under 30 million.

By far the most popular countries to visit in 1999 were France at approximately 11 million visitors, followed by Spain at 9 million. The USA, Greece, and Turkey were far less popular at around 4, 3 and 2 million visitors respectively.

As you can see, the first paragraph discusses the line graph, and the second the bar chart.

You will not usually need to mix up the descriptions. This will only make things complicated and difficult to follow. Writing about the first one and then the second one is ok for a bar and line graph or any others that appear together.

As with any task 1, you will need to make sure you use the right language, make comparisons, and group data appropriately.

Follow this link to to the models graphs pages to view the full graph with its model answer.