At least 149 people were killed in a crush when a huge crowd celebrating Halloween surged into an alley in a nightlife area of the South Korean capital Seoul on Saturday night, emergency officials said.

A further 150 people were injured in the melee in Seoul’s Itaewon district, Choi Sung-beom, head of the Yongsan Fire Station, said in a briefing at the scene.

Many of the injured were in serious condition and receiving emergency treatment, the officials said.

It was the first Halloween event in Seoul in three years after the country lifted COVID restrictions and social distancing. Many of the partygoers were wearing masks and Halloween costumes.

Some witnesses described the crowd becoming increasingly unruly and agitated as the evening deepened. The incident took place at about 10:20 p.m. (1320 GMT).

“A number of people fell during a Halloween festival, and we have a large number of casualties,” Choi said. Many of those killed were near a nightclub.

Many of the victims were women in their twenties, Choi said. 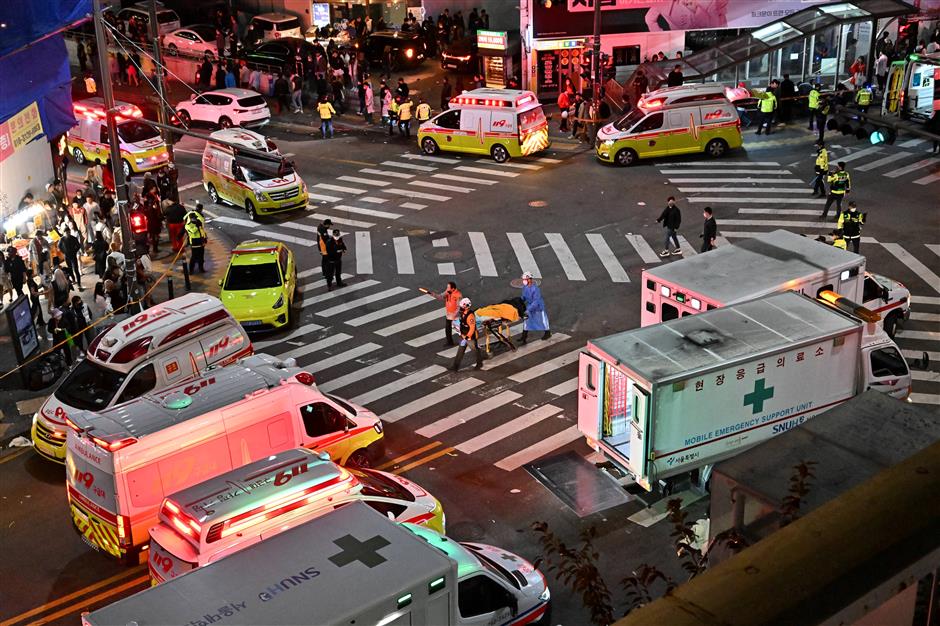 A person, believed to have suffered cardiac arrest, is transported in a stretcher in the popular nightlife district of Itaewon in Seoul on October 30, 2022.

Witnesses described chaotic scenes moments before the stampede, with the police on hand in anticipation of the Halloween event at times having trouble maintaining control of the crowds.

Moon Ju-young, 21, said there were clear signs of trouble in the alleys before the incident.

“It was at least more than 10 times crowded than usual,” he told Reuters.

Social media footage showed hundreds of people packed in the narrow, sloped alley crushed and immobile as emergency officials and police tried to pull them to free.

Choi, the Yongsan district fire chief, said all the deaths were likely from the crush in the single narrow alley.

Other footage showed chaotic scenes of fire officials and citizens treating dozens of people who appeared to be unconscious.

Fire officials and witnesses said people continued to pour into the narrow alley that was already packed wall-to-wall, when those at the top of the sloped street fell, sending others below them toppling over others.

An unnamed woman who said she was the mother of a survivor said her daughter and others were trapped for more than an hour before being pulled from the crush of people in the alley.

A Reuters witness said a make-shift morgue was set up in a building adjacent to the scene. About four dozen bodies were carried out later on wheeled stretchers and moved to a government facility to identify the victims, according to the witness. 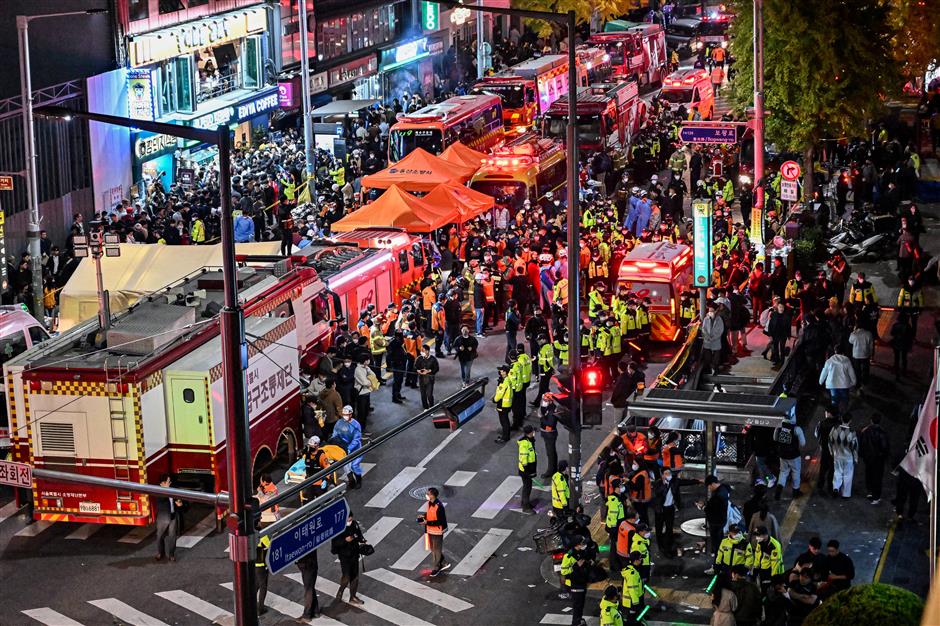 Onlookers, police and paramedics gather where dozens of people suffered cardiac arrest, in the popular nightlife district of Itaewon in Seoul on October 30, 2022.

The Itaewon district is popular with young South Koreans and expatriates alike, its dozens of bars and restaurants packed on Saturday for Halloween after businesses had suffered a sharp decline over three years of the pandemic.

“You would see big crowds at Christmas and fireworks … but this was several ten-folds bigger than any of that,” Park Jung-hoon, 21, told Reuters from the scene.

Foreigners were among those transferred to nearby hospitals.

British Prime Minister Rishi Sunak tweeted: “All our thoughts are with those currently responding and all South Koreans at this very distressing time.”

U.S. Secretary of State Antony Blinken tweeted: “We send our thoughts and deepest condolences to the family and friends of the deceased and injured, as well as to the people of (South Korea) as they mourn this horrific tragedy.”

With the easing of the COVID pandemic, curfews on bars and restaurants and a limit of 10 people for private gatherings were lifted in April. An outdoor mask mandate was dropped in May.

Authorities said they were investigating the exact cause of the incident.

President Yoon Suk-yeol presided over an emergency meeting with senior aides and ordered a task force be set up to secure resources to treat the injured and to launch a thorough investigation into the cause of the disaster.

‘Whoring’ is a highly subjective term for a news article. Prostitution and ‘whoring’ are two distinct notions.

Hey guys, I wanted to ask could we travel from hefei to nanjing by high speed train or not at this moment? And plus what all docs do we need to carry with us during the travel, if anyone travelled to other cities can also reply. Thanks;)

There is a night market on the walking street , usually runs between 21:00-2am

Hefei has change a lot , the transportation is more convenient now . One of my biggest change was getting from one spot to another . Sometimes you have to do there same circle like 4 times 😂 before finding your way

Covid Has Basically Reached The End Of it’s Course

China Releases List of 100 Major Cities for the First Time

Get information on important updates in Hefei sent to you directly